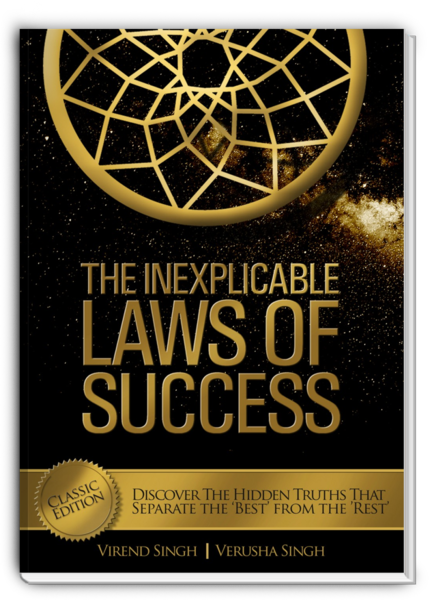 To live a harmonious life, you must not only abide by the laws of your country, but also by the natural Laws of the Universe. If you transgress, there will be consequences. Like any country, the universe is also governed by certain laws. We refer to these as Universal Laws or Laws of Nature, ‘whose content is set by nature and is therefore universal’ (Wikipedia).

The Law of Gravity is an example of a Universal Law. So is the Law of Conservation of Energy, that is, energy cannot be created or destroyed, only transformed from one form to another. However, unlike human laws, which can vary from country to country, Universal Laws are consistent and unchanging. You interact with these laws with every breath you take. They govern your existence.

Nothing about your life has been casual or accidental!

The Universal Laws seem to be mysterious. They have hidden truths. When you identify these hidden truths and utilise them correctly, miracles or amazing results occur in your life. It may manifest as suddenly having money when you need it the most, reversing a life-threatening disease, or succeeding in a particular endeavour. These ‘miracles’, no matter how incredible they might be, are not unbelievable outcomes. They are natural outcomes based on the correct application of specific laws of nature.

Unfortunately, some of the Universal Laws are not as clear-cut as they might seem. There are unnoticed subtleties to the Universal Laws which, when understood and applied, can make all the difference between happiness and misery, prosperity and poverty, peace and conflict, ease and struggle.

It’s easy to think that some people are born to affluence and all good things happen to them. The truth is, these people aren’t simply lucky; good things don’t just ‘happen’ to them. They’re just applying the Laws of the Universe more effectively, whether they’re aware of it or not. The laws are flawless; they work perfectly every time, all the time. If you seem to be doing all the right things, but your results are poor, consider the Laws of the Universe and how you are applying them. This book will help you.

How many laws are there? Many.

It operates whether you are aware of it or not.

This is the suggestion a man gave to his subconscious mind over a period of about two years: “I would give my right arm to see my daughter cured.” It appeared that his daughter had a crippling form of arthritis together with a so-called incurable form of skin disease. Medical treatment had failed to alleviate the condition, and the father had an intense longing for his daughter’s healing, and expressed his desire in the words just quoted.

One day the family was out for a drive. Their car was involved in a head-on collision. The father’s right arm was torn off at the shoulder. When he came home from the hospital, he discovered that his daughter’s arthritis and skin condition had vanished. (Murphy, 2001 – The Power of the Subconscious Mind)

Everyone is subject to these same natural Laws of the Universe, regardless of race, colour, creed or gender. The laws exert their influence without our consent or awareness. When we choose the behaviour, we choose the consequences. Interestingly, the people who are frustrated in life consistently try to defy the natural laws. And, not surprisingly, successful people live in harmony with the natural Laws of the Universe.

Deepak Chopra, an authority in mind-body medicine, identified these issues in his bestselling book, The Seven Spiritual Laws of Success, saying ‘no debt in the universe ever goes unpaid. There is a perfect accounting system in this universe, and everything is a constant “to and fro” exchange of energy’.

All of life is connected; what we do to others, we do to ourselves. According to the principle of karma, any negative or positive thought or action remains that way, until it expends (uses up) its energy by acting upon the originator. The energy you create through your thoughts, words and deeds — either negative or positive — will rebound and act on YOU. But, as it is the nature of energy to expand when it is put out into the world, you will at some point experience much more than you caused others to experience.

If you cause others to experience prosperity and wellbeing, it will come back to you and you will experience it as well, often multiplied. In like manner, if you hurt someone, the energy will eventually return and cause you even greater hurt, unless of course you make amends in some way.

Nature understands no jesting; she is always true, always serious, always severe; she is always right, and the errors and faults are always those of man. The man incapable of appreciating her, she despises and only to the apt, the pure, and the true, does she resign herself and reveal her secrets.

The Law of Cause and Effect is the IRON LAW of the universe. It is unyielding. If you defy this law, there will be consequences — no ‘ifs, ands, or buts’ about it. It’s fascinating (and often tragic) to observe how many of us try to defy this law, especially when we pursue quick and easy gains. Often we strive for what we want by doing the exact opposite of what is in our best interest. This beautiful fable illustrates the mystifying and sometimes illusive nature of the Law of Cause and Effect.

The Secret to Creating Affluence

A young man went to the forest and said to his spiritual master, ‘I want to have unlimited wealth, to help and heal the world. What is the secret to wealth?’

The spiritual master said, ‘There are two Goddesses that reside in the heart of every human being: the Goddess of WEALTH and the Goddess of KNOWLEDGE’.

‘Although you love both, you must pursue one of them to the exclusion of the other. Pursue her, love her, and give her your attention. Understand that only the Goddess of Wealth can give you wealth, and you may pursue only one Goddess, not both’.

The human tendency is to pursue the Goddess of Wealth, which seems like the logical choice. However, wealth is simply an effect, and like any effect it has a cause. In the fable, pursuing one goddess gets you the best of both worlds; wealth comes from the acquisition and proper application of knowledge. So let’s be clear: your goals and dreams will manifest when you and the Laws of the Universe are in harmony! It’s a scientific fact that the universe operates in absolute harmony with IRREVOCABLE natural laws and principles that have NEVER varied throughout all time. These laws prevail regardless of whether we heed them or not. Those individuals who live in harmony with the Laws of the Universe will emerge victorious. Bestselling author, Bob Proctor, summed it up perfectly when he said,

You are living and working in a dynamic global marketplace that leaves little room for error. In future, only those individuals whose beliefs are sound, in harmony with the laws of the universe, and have been integrated with their behavior, will emerge as real winners.

This much we know with certainty: you have unlimited potential and you can tap into and harness this potential by combining:

In other words, you’ll experience the rewards (the Law of Receiving) when you truly understand that you have immense, untapped ability, and you combine that understanding with deliberate application of the Law of Attraction and the Law of Action. These are the three key laws of manifestation that interact to create abundance in your life. Use these laws in cohesion to expedite your success and achieve better results.

This is an extract from The Inexplicable Laws of Success [Classic Edition] by Virend and Verusha Singh. Check out the Amazon customer reviews and download your copy here.